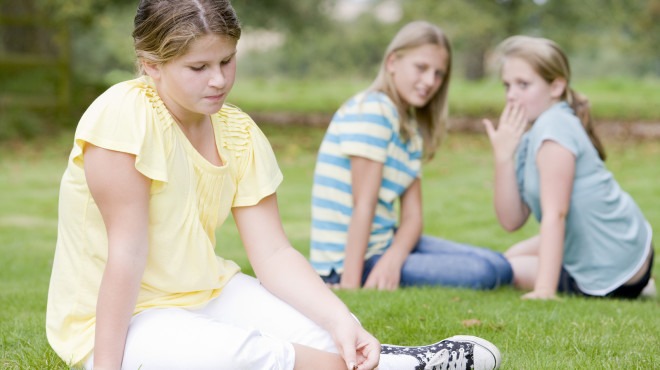 In a 2016 article published in The Guardian, author Lindy West asks: “What do you do when you’re too big, in a world where bigness is cast not only as aesthetically objectionable, but also a moral failing?”

Negative stereotypes regarding obesity are abundant and pervasive. According to Professors Rebecca M. Puhl and Kelly D. Brown at Yale University, these stereotypes include, “perceptions that obese people are mean, stupid, ugly, unhappy, sloppy, lazy, and lacking in personal control.”

Negative stereotypes translate into active discrimination in the form of teasing. For example, research by clinical psychologist Helen A. Hayden-Wade and colleagues at the Child and Adolescent Services Research Center in San Diego, California, found that children who are overweight are teased more often and by more people compared to non-overweight children.

The authors wrote that their findings, “indicate that teasing overweight peers may be an endemic and socially sanctioned part of youth culture. That is, it may be acceptable and normative for the entire peer group to tease about weight, whereas this would not be the case for teasing about other issues.”

For overweight and obese children, weight-based teasing can be a source of immense distress. The researchers found that overweight, chronically teased children are lonelier than their non-overweight counterparts, prefer spending time alone, and prefer to engage in sedentary activities, such as watching television rather than playing outside.

The downstream consequences of chronic weight based teasing can be severe, and include the development of disordered eating patterns, such as binge eating. Children who are victimized are also much more likely to experience clinical levels of stress, depression and anxiety.

Lindy West describes her personal experience of responding to society’s negative views of fatness. She writes: “You fold yourself up like origami, you make yourself smaller in other ways, you take up less space with your personality, since you can’t with your body.”

Weight based stigma and exclusion begins early. One study found that children ages three to five years old were significantly more likely to ascribe characteristics such as mean, stupid, ugly and sloppy to overweight peers compared to those who were not overweight.

To make matters worse overweight children may be stigmatized by their parents.

According to Dr. Puhl and her colleague, Professor Janet D. Latner, parents may experience feelings of guilt, anger, and frustration regarding their child’s weight. These feelings may be fuelled by a sense of helplessness, because they do not know how to help their child lose weight.

Parents may be cognizant of the stigma that others express towards their children, and enact those negative attitudes. They may stigmatize their children with negative comments, perhaps as an attempt to motivate weight loss, without realizing that such actions have the opposite than intended effect.

Dr. Puhl says: “Messages that shame, blame and stigmatize people about their weight have a negative impact and interfere with efforts to improve health.”

Dianne Neumark-Sztainer, a Professor at the University of Minnesota, recommends that obesity treatment programs actively address stigma and body image, and refrain from using body dissatisfaction as a motivator for change.

Unless those stereotypes are addressed on an inner level, real change may remain elusive. If a person believes that they are inherently disgusting and unlovable, then taking strides toward self-care may seem futile and meaningless.

West writes: “I don’t want the people who love me to avoid the reality of my body. I don’t want them to feel uncomfortable with its size and shape, to tacitly endorse the idea that fat is shameful, to pretend I’m something I’m not out of deference to a system that hates me.”

West points out the social construction of anti-fat prejudice. Socially permissive attitudes allow weight stigma to regularly wreak havoc on the psychological and physical health of millions of people.

According to Dr. Puhl, “It is actually legal to discriminate on the basis of weight, and that sends a message that bias, unfair treatment or bullying of overweight children is tolerable.”

It is, in fact, intolerable.