The Most Powerful Antivaccinationist of Them All 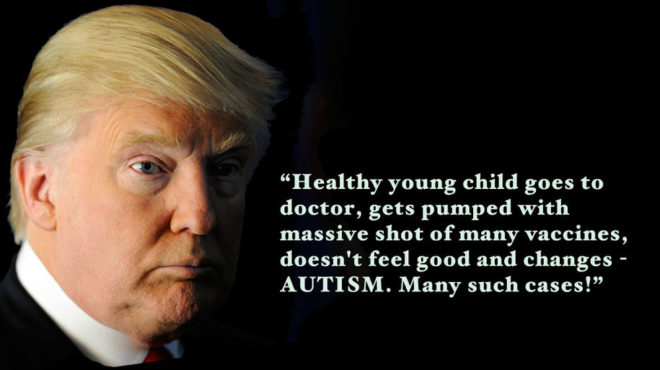 It is well documented in the scientific literature that routine childhood vaccinations are extremely safe and have cumulatively saved the lives of millions upon millions of people over the last century.  Nonetheless, there is a group of conspiracy theorists, pseudoscientists, and miseducated people who feel that vaccines are either ineffective, dangerous, or both; they are collectively referred to as antivaccinationists.

Antivaccinationism periodically pokes its head into the US election process.  In September of 2011, for example, the subject was brought up during one of the republican primary debates at which time Michelle Bachmann stated that the human papilloma virus (HPV) vaccine causes ‘mental retardation’. In one of the 2016 republican primary debates, Ben Carson, a pediatric Neurosurgeon (a doctor who works with children and should know better) made these statements:  “It is true that we are probably giving way too many [vaccinations] in too short a period of time” and “A lot of this is pushed by Big Government, and I think that’s one of the things that people so vehemently want to get rid of, Big Government.” Senator Rand Paul also expressed mistrust for the current CDC-recommended vaccination schedule, advocating, instead, for delaying vaccinations and “spreading things out”.

Bachmann, Carson, and Paul’s statements were all patently false and without any scientific merit. Thankfully, they did not make it too far through the presidential election process and as such, their dangerous antivaccinationist views never spread to the majority of American citizens.
But there is one 2016 antivaccinationist presidential candidate, Donald Trump, whose completely false and unfounded anti-vaccine beliefs pose a great threat to America’s public health. The reason, of course, is that he stands a real chance of becoming the 45th President of the United States of America. Here is what Trump said during the 2016 Primaries debate:
“You take this little beautiful baby, and you pump — I mean, it looks just like it is meant for a horse, not for a child, and we had so many instances, people that work for me, just the other day, 2-years-old, beautiful child went to have the vaccine and came back and a week later got a tremendous fever, got very, very sick, now is autistic.”

I shudder at the thought that a man with such false and undermining public health views may be weeks away from becoming the most powerful man on the planet.Trump’s position on vaccines date back as far as 2007 when he made the following comment at an Autism Speaks fundraising event:

“When I was growing up, autism wasn’t really a factor. And now all of a sudden, it’s an epidemic. Everybody has their theory. My theory, and I study it because I have young children, my theory is the shots. We’re giving these massive injections at one time, and I really think it does something to the children.”

Other misinforming antivaccine comments by Mr Trump over the years include:

Massive combined inoculations to small children is the cause for big increase in autism….

If I were President I would push for proper vaccinations but would not allow one time massive shots that a small child cannot take – AUTISM.

Healthy young child goes to doctor, gets pumped with massive shot of many vaccines, doesn’t feel good and changes – AUTISM. Many such cases!

No more massive injections. Tiny children are not horses—one vaccine at a time, over time.

I am being proven right about massive vaccinations—the doctors lied. Save our children & their future.

“@OnlineOnTheAir: My friend’s son, immediate #autism after #vaccines 10 yrs ago. So sad. Keep up good work Nay-sayers will understand soon.”

I’m not against vaccinations for your children, I’m against them in 1 massive dose.Spread them out over a period of time & autism will drop!

So many people who have children with autism have thanked me—amazing response. They know far better than fudged up reports!

And, again, during the primaries debate in 2016

The public health implications of an antivaccine zealot leading the most powerful country on earth is beyond frightening.

I write this in the hopes the enough readers join me in reaching out to upcoming presidential debate moderators and their networks to request, or even demand, that Donald Trump be pressed on his antivaccinationist views during the debates.

If you’d like to support this effort, consider tweeting to any/all of the following

Some examples of tweets you may wish to publish (feel free to copy and paste).

[email protected], Please consider vetting @realdonaldtrump by pressing him on his #antivaccine beliefs during the upcoming presidential debate
[email protected], Mr @realdonaldtrump is #antivax. Americans deserve to learn more about this. Please explore during the presidential debate
[email protected], Donald Trump has an anti-science world view and #antivaccine beliefs. Please ask about this at the presidential debateAlternatively, publish your own tweets. The stronger and broader the message, the higher the likelihood that the topic will be brought up at one of the debates. The health and well being of our child may depend on the outcome of this incredibly important election. Let’s do our part to protect them.