Early Speech and Language Intervention For Preschoolers – My Personal Perspective 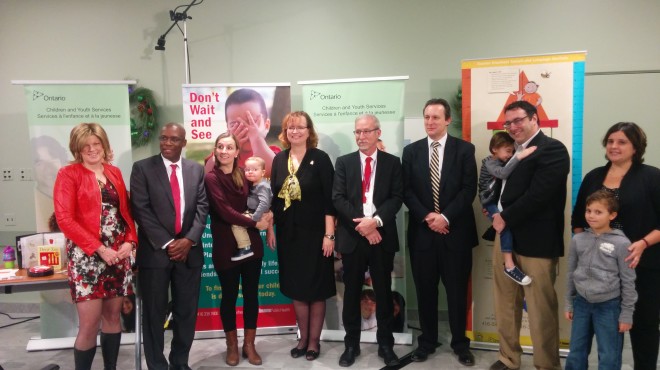 This morning, I had the privilege to attend, along with my son Noah, an important event hosted by Surrey Place and attended by The Honourable Tracy MacCharles, Minister of Ontario’s Children and Youth Services. During the ceremony, Minister MacCharles announced an additional 6.9 million dollars to support preschool speech and language services in Ontario.

Nearly 6 year old  Noah struggled with acquiring communication skills in his first 3 years of life and our family benefited substantially from the preschool speech and language services delivered through this Ontario initiative. It was in this context that he and I were invited to take part in the ceremony.

I was asked to say a few words as part of the event and I thought it might be worthwhile sharing my speech as a means to raise awareness of the importance of funded services like the Ontario Preschool Speech and Language Programs; just last year, 58,000 children received much-needed speach/language services thanks to this initiative.

And here is the speech:

Good morning everyone. Thank you all so kindly for allowing me this opportunity to speak with you this morning.

I am here today in a triple role: as a father, as a pediatrician, and on behalf of my wife, Dana, a speech and language therapist who, incidentally, works for Toronto Preschool Speech and Language Services. I would also like to introduce you to my lovely son, Noah, who, as you will soon learn, had a challenging first few years learning to communicate.

Noah was born 6 years ago. At around 6-to-9 months of age our feelings about his quiet and unassuming personality evolved from “wow we sure are lucky to have such a calm and quiet baby” to “Oh My God!! Why isn’t he talking like the rest of his peers”. By about a 1.5 years of age, we learned that Noah had a motor speech problem – meaning that he had a good understanding of language and a desire to express himself, but he couldn’t coordinate the muscles of his mouth and vocal cords to actually produce words and string together sentences.

There is another thing about Noah that is important for me to mention. Noah is the kind of child who will not even try a task until he has convinced himself that he has mastered the requisite skills. Call it a confidence thing, a perfectionism, but until he convinces himself that he can do something well, there’s no chance he’s going to try.

So as you can imagine, we had this 18 month old boy with a motor speech problem and a complete unwillingness to even try speaking because he convinced himself that he couldn’t do it. Let me tell you, this was a very quiet young boy.

Enter Toronto Preschool Speech and Language Services with early intervention for Noah. His therapy was the most amazing process of Noah acquiring tangible skills, developing confidence as a communicator, and empowering his parents to collaborate with his therapist to carry on his ‘therapy’ between and beyond his formal sessions.

After 2 years of services, Dana and I were so very proud of Noah’s success … and I continue to beam with pride to this very day when I say to anyone who is willing to listen that “this boy never shuts up!” Noah entered the school system last year feeling confident and competent as a communicator. On behalf of Dana, Noah, and myself, I cannot begin to express my gratitude for the wonderful service that Toronto Preschool Speech and Language Services has provided for our family. It means the world to us!