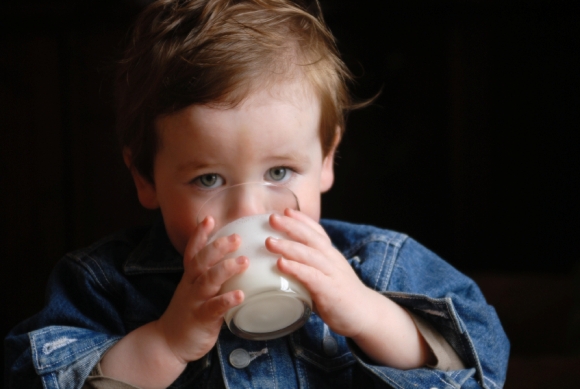 A few months ago, I was asked by a colleague to see a 21 month-old toddler with anemia. I’m not talking about the mild anemia that we often see among kids who aren’t quite getting enough iron-containing foods in their diets. I’m talkin’ SEVERE anemia – Hemoglobin of 30 g/L (one fourth the normal level) anemia. This is the kind of anemia that elicits instant panic in doctors as they reflexively set up for an emergency blood transfusion.

What on earth can cause such a scary situation in an otherwise healthy child? Believe it or not the answer in this case was: milk – good old-fashion run-of-the-mill milk.

How can this be? Milk is a recommended food in Canada’s Food Guide (or the US government’s choosemyplate.gov). Could Milk be that toxic? Digging deeper into the child’s nutritional history helps to better explain.

How can milk cause such a profound anemia?

Let’s first consider the two major ways that the body can develop iron-deficiency anemia: 1) from not consuming enough iron, or 2) from blood loss (iron is stored and used in the blood). It turns out that excess milk consumption actually causes anemia via both of the above mechanisms.

Not enough intake: This mechanism relates to what I call nutritional opportunity cost. Milk contains very little iron. If a child consumes the majority of her daily calories in the form of milk, then that leaves little room for iron-containing foods in the diet. So iron-containing foods get displaced by the overabundance of milk and as a consequence, iron intake declines and anemia sets in.

Blood Loss: This second mechanism has to do with the direct toxic effects of excess milk consumption on the bowel. Excess milk can damage the lining of the gastrointestinal tract resulting in microscopic injury and blood loss, an entity known as milk enteropathy. The rate of blood loss is usually quite slow. Much like how a leaky faucet dripping for weeks can cause a house flood, a slow trickle of blood from the gut can result in a dramatic cumulative blood loss and consequential severe anemia.

How Sick do These Kids Get?

Do these pale milk-loving kiddies need blood transfusions? In the vast majority of cases the answer is no. Amazingly, this problem generally develops so slowly that the kids actually adapt quite readily to the developing anemia. They therefore rarely present as particularly sick. Usually they are a quite pale, a bit fatigued, and often moderately overweight from the excess calorie consumption. That’s pretty much it. Amazingly, this is not typically a life-threatening situation. Blood transfusions are rarely needed, and sometimes cause more harm than good.

In terms of treatment, really all that’s needed is to bring balance back to the diet. Limiting the milk intake to a maximum of 12-16 ounces per day is likely the only intervention needed. The bleeding stops, the children broaden their diets thereby increasing the intake of iron-containing foods.  As a result, the iron levels gradually rise and the anemia resolves. Most docs also prescribe treatment doses of iron supplements. Within weeks to months, the follow-up blood-work typically shows the anemia well on its way towards resolution.

In this particular case, my patient’s parents limited the milk to 12 ounces a day and started treatment doses of iron. 2 weeks later, the child was eating a wide variety of different foods and the bloodwork showed a near-tripling of the Hemoglobin. By 3 months out, all bloodwork was normal. The anemia completely resolved.

The Moral of the Story:

I’m sharing this case not to vilify milk or scare parents into cutting milk out of their children’s diets. Rather, I think this is a fabulous example of how food, in and of itself, is neither good nor bad. Rather, healthy nutrition is about amounts and variety way more so than the actual specific foods themselves. Drink the right amount of water and your body will maintain hydration and keep healthy. Drink extreme amounts of water and you can very possibly die from the sodium dilution of water toxicity. Eat moderate amounts of spinach and kale and your body will thank you for all the vitamins, minerals, and phytonutrients. Eat excess quantities of Kale and Spinach and you may suppress your thyroid function. The same goes for milk. It is reasonable to offer your child 1 to 2 glasses of milk per day for a healthy dose of calcium, protein, vitamin D, and a host of other essential nutrients. Overdo it and unhealthy stuff may happen.

Remember: health and nutrition are all about moderation and balance.

PS – Milk isn’t the only cause of severe anemia in children. Any child with anemia (regardless of the cause) should get careful, ongoing care and guidance from her physician straight through until resolution of the problem and beyond.